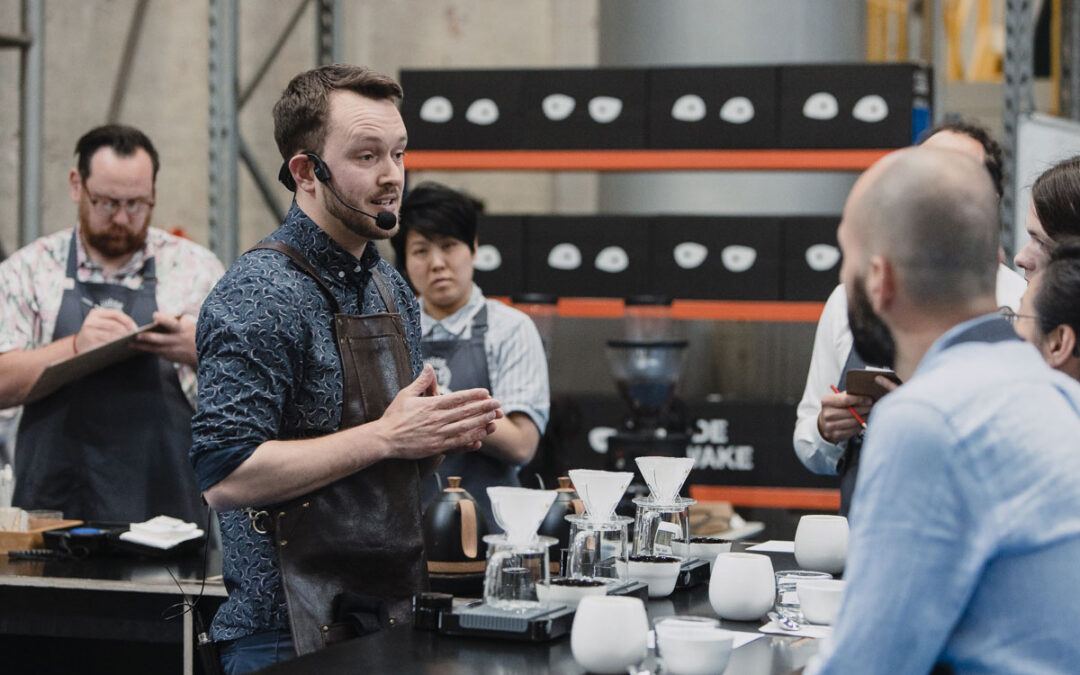 Southern Region Brewers Cup Champion and #ASCATop12 top seeded brewer David Train talks about how he has grown as a coffee brewer and professional thanks to competition.

When did you begin competing in ASCA championships?
My first ASCA competition was the Southern Region Brewers Cup in 2017.

What inspired you to take part?
There were two main reasons, one was to challenge myself after having worked in coffee for so long, and two was to share what I believed was a coffee and message that needed to be heard.

What were some of the challenger you faced in the beginning?
Stress, preparing for me was such an intense time, I was preparing alone, without a coach or anyone to bounce ideas off.  I was not worried about me or what I did, but I did not want to disappoint the producers for whom I was representing.

How were these overcome?
By realising I was not alone, and there were and are people who are willing to help listen to me, help me remember my words, write my flavour notes, and to help deal with everything that goes in to preparing.

What is it about your main field of competition that made you choose it over the others?
I choose to compete in the Brewers Cup because I was living in Europe for almost 8 years where the filter/black coffee culture was more progressive then here in Australia, so I had been brewing for a few years and I drink filter coffee 99% of the time. So, it was the only competition I had the desire to enter. But in saying that, I do have some drive to compete in one or two other fields in the future 😉

What have you learnt about coffee through competing?
A multitude of things. First and foremost is to trust yourself, your ideas and your strengths. Practice your weaknesses. Every time I have entered, I have focused my energy to learn something that I did not know before. For example, doing water chemistry classes with Dr Monika Fekete, or tasting organic acids and coffee chemistry with Dr Joseph Rivera.

How has it impacted your career?
I am someone that needs to challenge and stimulate my brain, I need to be constantly learning, so competing and understanding the multiple levels of complexity that are in involved not just in brewing but understanding coffee along the supply chain, scientifically and sensorially has helped me to get to where I am in my career today.

What is your best memory from competing in coffee championships?
Placing 3rd at Nationals in 2019, with ironically the perfect score [in Open Service]. Or winning the Southern Region Brewers Cup for 2020. Both these experiences were made even better because they were with my coaches and best friends Dang Nguyen, and Frederick Kjaerulff-Schmidt.
I have also loved getting to know so many other coffee professionals around Australia and the world.

What are some of the easy mistakes you’ve made early in your competition journey?
Read the rules and understand the score sheet, you are not competing against anyone else, but the score sheet. And don’t be afraid to ask for help, I was too stubborn at first to ask for help, and without the help and advice I got, I never would have done as well as I have now.

What advice would you give others thinking about competing?
Just do it, there is no better way to learn and to push yourself in coffee then to compete.

Is there anything you’d like to add?
If there is anyone out there not sure about competition, or an independent competitor like myself wanting some advice please don’t hesitate to reach out: @dtraincoffee