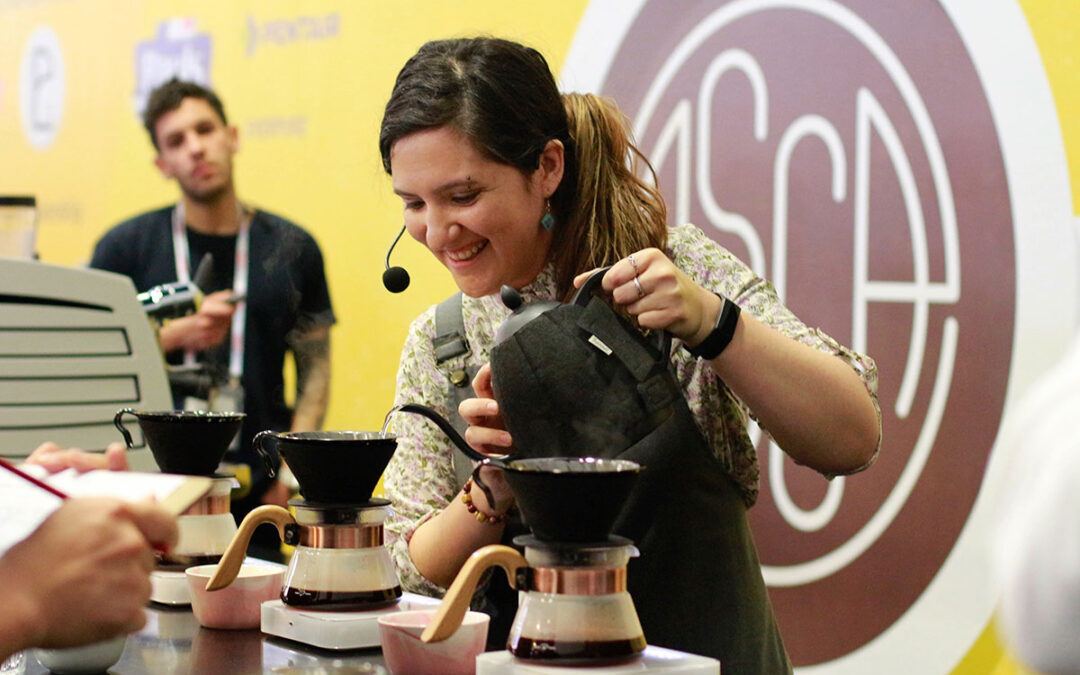 Reigning Australian Brewers Cup Champion and 2020 Brewers Cup #ASCATop12 member, Yanina Ferreyra of Project Origin, talks getting into competition and what she’s learned along the way.

When did you begin competing in ASCA championships?
The Barista competition in 2016 was my first time. It was a lovely experience, and I was lucky enough to place fifth in the Australian Nationals that year. I was showcasing some lovely coffees from Honduras that meant a lot to me.

What inspired you to take part?
I was part of the competitions since 2012. I volunteered for ASCA in every single MICE until I started competing myself.
I was able to push trolleys, plug grinders and wipe up Brewers Cup tables before competing myself.
Seeing champions getting ready backstage gave me the urge to one day do it myself.

What were some of the challenger you faced in the beginning?
Finding the time to practise while working full time in a café was always tricky. Same as keeping my routines undertime. 😛
But apart from those little issues, the real challenges were always with myself and my own belief of what I could achieve.

How were these overcome?
In 2019, I decided to completely let go the idea of ‘what were my odds of doing well?’. No other female had won Brewers Cup in Australia and I was 100% invested in achieving that.
It took a lot of mental preparation. Also, not being a brewer before meant a lot of physical training in achieving that!

What is it about your main field of competition that made you choose it over the others?
I started with Barista and moved on to Brewers when my job changed.
I’m now a green coffee buyer and travelling for work so much has made filter coffee my preferred coffee beverage.

What have you learnt about coffee through competing?
So much! But the most important thing is the human aspect of enjoying it.
I pay a lot of attention to ‘customer service’ part of the scoresheet because I think it can be the real multiplier for the enjoyment of the drink.
And there is ‘No. 1 champion’ coffee. You must work very hard to tick all the boxes to present the winning routine of the day

How has it impacted your career?
It definitely opened a lot of doors for me.
I joined a green coffee company already having a competitor’s brain.
And that helps you to see beyond the score, into what a coffee can actually do once it’s fully prepared to be served.
That vision of coffee has been invaluable for my professional career.

What is your best memory from competing in coffee championships?
Finding my idols backstage on my first year. I remembered I asked Tilly [Sproule], Rie [Moustakas] and even Pete Licata for a photo while I was preparing for finals.
I never lost those ‘coffee fan girl’ eyes and even last year, going to Worlds in Boston, I kept getting super excited to meet so many legends backstage.

What are some of the easy mistakes you’ve made early in your competition journey?
Going overtime on 2016 Barista finals cost me a lot. But the harsher one was in the 2017 Barista competition year.
I wasn’t sure about my own coffee and I did what no competitor should ever do: mention tasting notes that sounded great but weren’t in the cup.
Judges can see right through that. I knew it, but I still did it out of fear, and I missed finals because of that.
It made me so upset for letting the producer down more than anything.

What advice would you give others thinking about competing?
Give it a go. And don’t wait for the ‘right time’ to do it. The best day to start is today

Is there anything you’d like to add?
Thank you BeanScene for sharing the stories of coffee. My first approach to specialty was back in 2011, when I used to buy the magazines but didn’t know any specialty coffee shops yet!